She’s Got the Beat 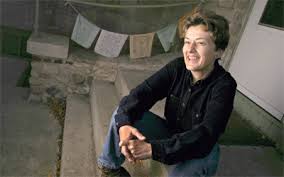 There’s a story Cheri Maples tells about the first time she saw her Buddhist practice in action. The year was 1991, and Maples, then a patrol cop on the Madison, Wisconsin, police force, was responding to a domesticviolence call. A divorced dad was holding his young daughter hostage, refusing to hand her over to his ex-wife after a weekend visit. When Maples interceded, he threatened her. Ordinarily, she would have slapped handcuffs on the guy and hauled him off to jail. But she had just sat her first retreat with the Vietnamese Zen master Thich Nhat Hanh, and the experience “had broken open my heart,” Maples says. She persuaded the father to release his daughter and then, instead of arresting him, spoke to him from her heart. Within minutes, he was in tears.

“Here I am, 5’3″tall, with a gun belt strapped to my waist, and this 6’3″ man is bawling like a baby in my arms,” Maples recalls. “I violated every tenet of my tactical training in that scenario.” But a few days later, when she ran into the man in a local shop, he swept her up in a bear hug and exclaimed, “Thank you for saving my life!”

Nowadays, finding a compassionate resolution to conflict is business as usual for Maples, a fifty-six-year-old social-justice advocate, consultant, and trainer for criminal-justice professionals— and, since January 2008, dharma teacher in Thich Nhat Hanh’s Order of Interbeing. Since that pivotal night when her approach to policing shifted, Maples has introduced meditation and mindfulness to police officers, judges, prosecuting and defense attorneys, correctional and parole officers, social workers, and prison officials. “I’ve worked hard to bring the spirit of mindfulness training to my work,” she says, “including the belief that you can never end violence with violence and that punishment isn’t the right philosophy to build a criminal-justice system around.”

If “Buddhist cop” sounds like an oxymoron, Maples’s back story soon makes sense of the dichotomy. Before even considering police work, she earned a master’s degree in social work from the University of Wisconsin, worked as a community organizer and women’s advocate—she was the first director of the Wisconsin Coalition against Domestic Violence—and completed all but the last semester of coursework toward a Ph.D. in social work.

Maples joined the police force at age thirty-one for the most mundane of reasons: she was disenchanted with academia and tired of struggling to get by on a part-time teaching assistant’s salary. She and her partner at the time were raising the first of their two sons. An acquaintance who had gone from social work school to the force told Maples, “If you want to make money, work in a male-dominated profession. We’re basically social workers with guns.”

As it happens, it was a propitious time to become a cop. Madison’s police chief, who later became a minister, was, according to Maples, a very progressive guy. “He put billboards up around Madison saying things like ‘Join the alternative Peace Corps, the Madison Police Department.’” Over the next twenty years, she rose steadily through the ranks to captain in charge of recruiting and training—one of the top two posts in the department. (Along the way, she earned a law degree while working the night shift.) In 2005, when she was passed over for police chief, Maples left the force and became the head of probation and patrol for the state of Wisconsin, then served in the state attorney general’s office until 2008.

Maples loved her first re 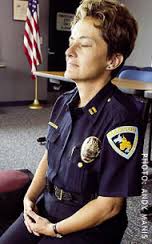 treat—the silence, the atmosphere of tolerance. “Thay [Thich Nhat Hanh’s nickname] kept changing pronouns from masculine to feminine, and when someone in a Q. & A. session asked him about same-sex relationships, he said the gender of the participants didn’t matter; what made a difference was the quality of the loving. I thought, ‘Man, I’m home!’”

Initially, Maples had no plans to take the Five Mindfulness Trainings, the Order of Interbeing’s rendering of the five precepts. She confided to Sister Chan Khong, one of the monastics at the retreat, that she was a cop and couldn’t reconcile carrying a gun with the precept on nonviolence. The nun’s response was simple: “Who else would we want to have carry a gun but somebody who would do it mindfully?”

Over the next decade, her practice deepened. She joined the SnowFlower Sangha in Madison and, as her supervisory and training responsibilities on the force increased, looked for ways to apply mindfulness on the job. “The biggest stressor in any workplace isn’t the work itself but the internal politics,” Maples says. Right speech—“ethical communication,” she calls it—became a major focus. “I started to think what it would be like to work in a workplace where people agreed not to gossip and to bring any criticism or complaint directly to the individual concerned or to the team.” As an adjunct to the mandatory health and wellness program for police officers, Maples began offering meditation training. “I taught them sitting, eating, and walking meditation and how to incorporate mindfulness into their work and life—all presented in a totally nonsectarian fashion.”

n 2002, Maples made her first trip to Plum Village, Thich Nhat Hanh’s retreat center in France, to take the Fourteen Mindfulness Trainings— vows marking a deeper commitment to the Order of Interbeing. While there, she wrote Thay about her struggles as a police officer: feeling like a victim because of the constant exposure to violence, and like an oppressor because of the authority she wielded. To her surprise, Thay’s dharma talk the next day focused on fierce and gentle compassion—and how to be a bodhisattva while carrying a gun.

Maples once asked Thich Nhat Hanh how he was able to reach groups of people from so many different backgrounds. “I just try to understand their particular suffering,” he told her. For Maples, teaching criminal-justice professionals has been a matter of translating the dharma into their language. In one training exercise she introduced at the police academy and still uses today, she asks people to identify the three core values they live by in everything they do, at home and at work. “If you’re not really what you stand for, then the things that matter the most are always going to be at the mercy of the things that matter the least,” she says. “The Buddha used precepts for this.”

The exercise involves idenitifying what Maples calls “Zen activities”— those that give you great joy: “You have to water the seeds of joy in your practice by engaging in the activities that completely absorb you, that develop the same things mindfulness does: concentration, focus, finding the extraordinary in the ordinary.” Her Zen activity is baseball. Though she no longer plays competitive softball or coaches her sons’ teams, she’s an avid fan.

Maples continually seeks ways to apply her practice for social justice. With her current partner, Maureen Brady, she set up the Center for Mindfulness and Justice as an umbrella for such efforts. Her focus at present is the Dane County Timebank—an alternative economic system, based on the exchange of skills, that builds community and invites universal participation by assigning equal value to all skills, whether dog walking or acting as legal counsel. Maples encouraged her sangha to join, and she has been instrumental in setting up the Timebank’s two criminal-justice programs: Youth Court, an alternative to incarceration for teenage offenders, and the Coming Home Prison Reintegration Project, which teaches meditation and mindfulness in prisons and provides training and support for prisoners upon release.

As part of her ordination ceremony, the Transmission of the Lamp, held at Plum Village in January 2008, Thay offered Maples a gatha—a short verse— and she reciprocated with one of her own. Just eight lines long, Maples’s “Police Officer Gatha” is the bodhisattva vow of a peace officer who no longer carries a gun but still packs heat. The verse ends like this:

Image 3: Maples walks with her dog, Gracie, near her home, in Madison, Wisconsin. ©Andy Manis